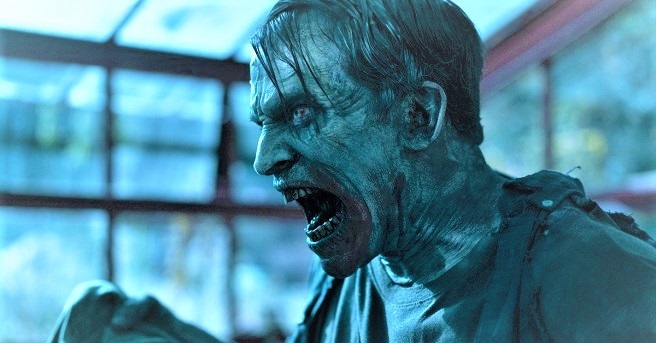 I wasn’t even going to review this film it was such a waste of my life, however, we best deal with the good and the bad… And the absolute rubbish.

‘Day of the Dead: Bloodline’ (2018) is a remake of George A. Romero’s ‘Day of the Dead’ (1985). As I haven’t seen the original I am unable to compare the two. Based on this film however, I have no incentive to watch the original, unless someone puts forward a strong argument on why I should…

Earth has been taken over by zombies at a rapid rate, the survivors take to living in a former military base, with high security (metal fences) and bunkers. All appears well until one of the survivor children falls ill and needs medicine that is only available outside the camp. It is up to the camp doctor Zoe Parker (Sophie Skelton) to encourage a team to go beyond the safety of the camp in order to get the medicine needed. As with any horror film, if you go outside into the danger, it’s going to cause some problems.

Before the zombie take over properly escalates, Zoe Parker works as a trainee pathologist (I assume that was what she was doing), and is already trying to find a medicine to counter act the zombie ‘disease’. One of her patients Max (Jonathon Schaech) becomes a bit obsessed with Zoe. She didn’t seem very appreciative of his attention, but come on, what girl wouldn’t want a guy to carve your name into their arm!? Romance right there…

When Max inevitably becomes a zombie there is something a bit different about him as a result of Zoe’s experiments. He was somehow more intelligent and a bit more human than the other zombies. Meaning he could track down and find Zoe in the bunker… Funnily enough he managed to get himself into the bunker! After that there was just a lot of running around, shouting and shooting.

My favourite character without a doubt is zombie Max, as the only zombie whose blood prevents him becoming fully being zombified (he was the experiment from before). Max is deemed more intelligent than other zombies. I probably wasn’t meant to side with Max the zombie, but I was rooting for him to wipe out all of the main characters who I didn’t care for in the slightest.

There wasn’t much by way of character development. Zoe Parker came across as just odd, stand offish, and a commitment-phobe to poor old doting Baca (Marcus Vanco). You know nothing of anyone’s background, how they came to be in the bunker, or how they develop as a character in the film. Everyone in the film was just mildly irritating.

With an $8m budget they could have done a lot more, where did that money even go!? It can’t all be on Max’s make up. ’28 Days Later’ (2002) had the same budget, and still made a brilliant film from it (recommend that over this!).

As you may be able to tell, I wasn’t gripped by this film. I’m glad they didn’t drag the film on for more than 90 minutes, this did mean that there were very few slow moving bits and therefore did have a good pace of action. I’m all for terrible zombie films, unfortunately this didn’t do it for me. Score 3/10